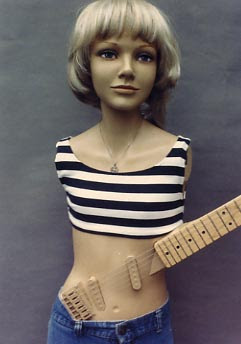 This is the first part of a 61 tracks song collection by THE WHEN MCGRUFF WAS KING from New Jersey entitled "The Greatest of TWMWK 1999-2009" (More to come from time to time...).

Those songs were not really compiled in a special running order, they were just sent to me by one of the band members, and I decided to pick the tracks randomly so that the chosen songs might fit onto one cdr. That of course means: The 15 tracks of "part 1" weren't really meant to run in that special running order, but me - I believe in chance and experimentation, and I think somehow the result is quite perfect: This cdr makes for great listening! There's so many different things going on, I promise, you won't be bored (that is: unless you don't have a heart for improvised experimental music...)

What is it that you'll get, if you enter the strange world of TWMWK?

There are songs that are almost ambient like, spacy ("america", "beasts in the sea"), others are indie style tootling without any direction ("snakecamera"), then there are actual 'songs' ("and thats why") or sheer nonsense pieces ("Call Yr Mom") or Punk Rock elements. And that's just some of it...

Like it is with all improvised music it's a mixed bag. You'll find moments of sloppy playing, uninteresting noise and dissonance, but you'll also find moments of musical greatness and unbelievable creativity and boldness, of sheer bliss and beauty.

Which is which is of course yours to decide!

Some more info by the band:

"We reside in New Jersey. We love this place and hate this place like most souls who wander timelessly in places for too long.- We started the group about 4 years ago, all of us having made music in our own right. (...) Most of anything you will hear from us is live, with a crowd, we record with different tape decks that we have at the moment, sometimes a two track two mic setup to get more depth, but it's always off the cuff, though we want to save money to really go all out in a studio and purposely puch completely in the opposite direction some outrageous 38 track monstrosity, just to do it, compose it...

Every performance varies, people on instruments, doing actions etc. we all play all instruments, so to actually keep track we would have to do a track by track reference of who played what, we usually cycle around the basic ones at shows, start on guitar, then play drums and sing, then play a tuba, then finish off on bass, it all happens...

We constantly make things, videos, performances, happenings, records, praintings, objects, all of it, and we are sometimes irresponsibly prolific History and what most believe as reality is completely engineered, manufactured, and re-written bullshit." (band info via email - more info in the zip-file)

THE WHEN MCGRUFF WAS KING - The Greatest of TWMWK

saw them outside no fun last year, they told me they weren't invited because one of them puked in thurston's car or something to that effect, great group.