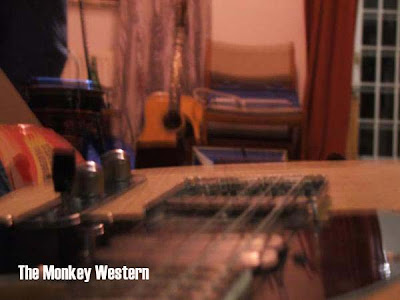 After you've had the chance to listen to the MONKEY EASTERN lately, you now get the opportunity to listen to its legendary prequel: THE MONKEY WESTERN – this time credited to DEMIS COUSCOUS AND FRIENDS. A mix of finger-pickin' and strummin' (more or less western style) guitar tunes and more conventional folk-rock songs with vocals, some of them quite funny.

"Herein lies the legendary Monkey Western Soundtrack. Recorded in it's entirety over one weekend, this is a collection of songs and incidental music for an imagined movie, the plot of which was never really discussed. The majority of the music was improvised and recorded in one take. This album features some songs which later made their way onto The Mackerelheads debut, including Czech radio "hit" Trouble Comes My Way.

Players on this album are, Demis CousCous, Divad Nyarb, Tam Revorg and occasional vocals by RZ. Highlights include Matts Desert Search For Sacred Horse, which still makes me laugh three years later, and the hypnotic 30 More Days." (D.CC. - more info in the zip-file)

and Friends - The Monkey Western

Get it here or here!