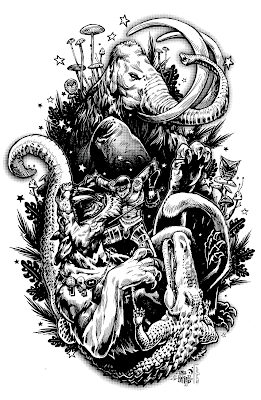 'Pissing Prisms' is already the eighth album by KILL KILL KILL from Los Angeles, CA.
All their albums are available for free download on their website

so if you like what you hear you are asked to check out their other albums there!

Personell on album #8 is:

From listening to this album I'd suppose that the band members are big fans of BORIS, SUNN O))), THE MELVINS and the like.

It seems that 'Pissing Prisms' was recorded live in the studio (KXLU, LA, as it says) and all songs are in fact part of one long session that floats along pretty well. Strongly recommended to fans of the aforementioned bands and fans of experimental heavy guitar playing in general.