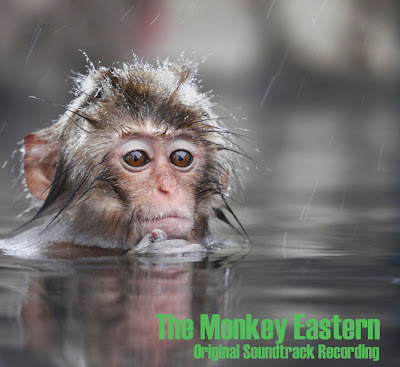 "Recorded over a few sessions in July/ August 2009 at Tam Revorgs studio, this collection features 46 minutes of incidental music and songs from an imagined movie, placing our monkey heroes in some generic Eastern land populated by Samaurai's, Polish people and sitar players.

Featuring a host of new instruments, this is one soundtrack that is guaranteed to exist, regardless of whether or not there exists a movie to synch it up to." (Demis CousCous)

Kind of a side project of the GRASS MONKEY, whose jam based music I posted some time ago, THE MONKEY EASTERN (Demis CousCous, Divad Nyard, Tam Revorg) sound quite different on this fake soundtrack recording. Most of the tracks are short guitar-based instrumental songs with a definite eastern flair, supported by the occasional use of more or less exotic instruments like sitar, tabla or harmonium (to name just a few - see complete list of instruments used in the info). Then we have some simple songs with lyrics and vocals (some of them quite funny), that are far less eastern sounding (more western sounding to my ears).