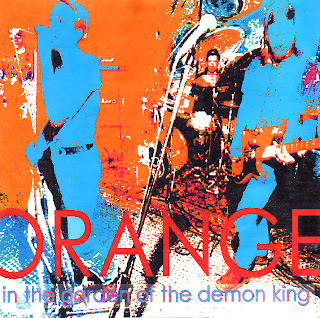 "Never draw conclusions about a garden from the way a person looks – and especially don't do so about the inside of the arbour from the way the garden looks."
This kid on the cover artwork at any rate looks like straight out of a Stephen King novel...


This is the 2nd demo-recording of the german psychedelic band ORANGE, based in Frankfurt a. M., from 1995. For more info check out the older entry here at HLFP.


The original ORANGE existed from 1993 until 1995. In those years the band released two demo tapes and was very active, playing many festivals in Germany (Rhein-Main area and south Germany) as well as a lot of solo performances, especially in Frankfurt and Wiesbaden.


This 2nd demo called "IN THE GARDEN OF THE DEMON KING" (as a kind of homage to KING CRIMSON) was recorded in true home recording spirit on a Fostex 4-track tape machine in their reheasal place in Frankfurt (an old WW II bunker). The band played and recorded the backing tracks in first takes on two days and then overdubbed vocals, guitar parts and assorted other instruments, noises and tape effects. This probably explains the somehow tinny overall sound, but nevertheless this recording definitly has its moments, especially on the 30 min psychedelic-experimental masterpiece "NEIL'S ELEVATOR". This track builds up quite slowly, starting with wind sounds and a long, slow guitar solo (kind of UFO-Flying-style), before rushing into the post punk indie instrumental main theme, with lots of different parts following, culminating probably in a bizarre, surrealistic druggy story told (in german) by singer Sue Boildice (about some pigs that don't like her green, new shoes because they remind them of the green grass... and more strange things happening) – very far out. Especially because Sue's voice of the backing track shimmers through and so creates a spooky, heavily disturbing overall atmosphere. After that you can listen to some kind of hobbits' freak-out party... (They even make an attempt of singing "Rosies" from the 1st demo...). The second (slow) theme follows, with Sue quoting some familiar lyrics above a PINK-FLOYD-Echoes-like backing... And this is just halfway thru the song! A heavy psychedelic roller-coaster/elevator ride indeed! Not to be missed!


In comparison with "Neil's Elevator" (by the way: also a live killer track!) the remaining songs (usually with Sue's PATTI SMITH like vocals to the front), though not bad, surely look a little pale. "Brown" and "Love in the Suffer Room" offer some kind of post grunge/indie sound, while the title track "In the Garden Of The Demon King" (formly known as "Orange" – remember "Red" by KING CRIMSON?) shows the band again in a more progressive mood.
I added "Soul Drive", usually part of "N.E.", as a single track, 'cause it is quite a good song in its own right.


Again: Only around 8o tapes were originally sold at concerts or given away to friends. So this is a true rarity.
Should be listened to on headphones!