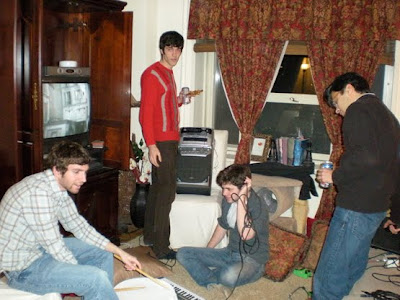 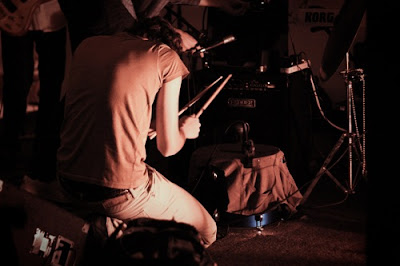 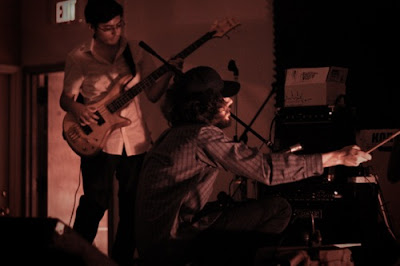 "... our soundtrack to the latest jurassic park movie, winter 2010" 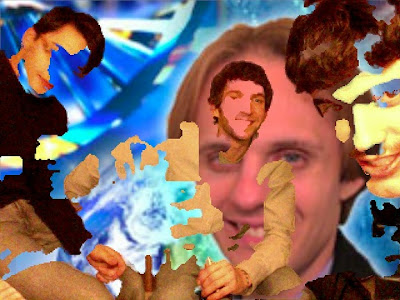 From Long Island, New York, come GLEN & THE BOYS.
They've been playing for around 5 or 6 years, but have only played a handful of live shows. Similar to THE WHEN MCGRUFF WAS KING from New Jersey their music is completely improvised.

"The band has, however, generated a large library of homemade recordings exploring a wide range of musical styles. Most of our pieces are improvised and feature anywhere from 2 to 10 instrumentalists. Please visit our website! We have lots of music to share for free... I'll bet if you dig deep enough, you'll find something you like!"

"Blue Silhouettes Eight Baller Party" is "us playing near a highway at my little brother's party, spring 2008". 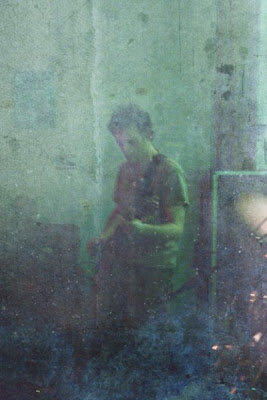 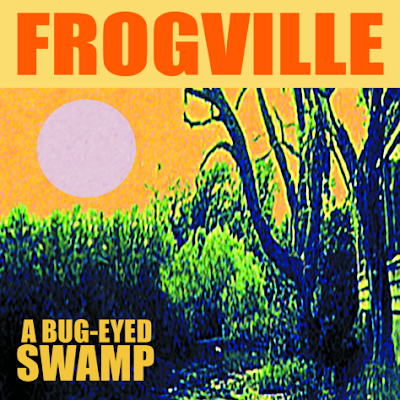 From New York State comes FROGVILLE, a psychedelic pop home recording project, that to my ears sounds heavily influenced by THE FLAMING LIPS. Not a bad thing, if you want my opinion...

"... basically I'm a guy that makes music in his bedroom apartment."

A: I'm from New York, now living in Yorktown Heights, NY completely isolated from any real music scene. Except for work I'm pretty much a hermit.

A: My name is Jason Raspa.

A: Bug-Eyed Swamp was recorded mostly on a Tascam 388, Studio 8, reel to reel. It's a really cool piece of equipment. It works and looks like a 4 track cassette recorder except with 1/4 inch tape. And it's fecking huge. I recorded all the major instruments analog. I heard it said that if you record (minimum) the vocals and drums analog then it'll trick the ear into thinking it's all analog. I believe this is mostly true. Fortunately, I had room for eight. I transferred the analog tracks to digital with my digirack 02 interface and recorded the rest in Sonar and used Izotope 4.0 and Har-Bal to master. There's so much stuff going on in the songs I needed more tracks and didn't want to give up control of the individual components by bouncing down analog.

A: This was recorded summer last year. I've done pretty much nothing to promote it and I don't have a band to play live with. I've recently decided to get off my ass so hopefully more people can hear it. If a tree falls in the forest and no one hears it, it probably has my CDs growing on it's branches. Which isn't good.

Q: Since when does this band/project exist/are you into music?

A: I've been making music since '04. Ruined an album in '06 by drenching it in too much reverb. (Hmmm - can there be such a thing as 'too much reverb'? m-f) I didn't know what I was doing and printed the effects. I printed spring reverb on everything killed it. So muddy. At the time I told one of my only fans that my girlfriend got pissed and lit the master tapes on fire. I was too embarrassed to admit my amateur blunder. I was so crushed by the whole experience I gave up the ambition of having my own album for two years.

A: I'd say my music is alternative, psychedelic, pop?

A: Not too hard to see my influences. Heavy Flaming Lips circa Soft Bulletin and all albums prior. My music isn't contrived in the slightest but I had been bombarding myself with the Lips for years and it had saturated my subconscious until I had all these songs coming out of me. They're still coming out but now though I'm moving in other directions. Luckily, I think when all was said and done the songs came out influenced but also very original and organic. Other notable influences, the Beach Boys, Beatles, Mercury Rev, Small Faces, Big Star, Magoo (not the rapper), Galaxie 500, Sparklehorse. Less notably, a lot of shit.

A: I have a new album almost done called MK-Ultraphonic. I release my CDs through my fake record company called Area 3 Records and free MP3 albums online with Quixodelic Records. It's really a collective of like minded people. Some great bands on there, most notably, The Loaded Whispers. Excellent band from Dublin. It's not Irish music. Everything on this label is psychedelic to some degree. And it's 100% free.

Q: Anything interesting to say to the readers?

A: Yes, eat your vegetables and brush daily! 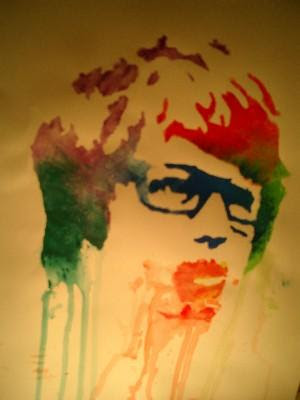 (taken from the Myspace page; not the ep cover)
One year ago I posted some EPs by a Canadian guy called RAVER (see here).
Well, some months went by, and RAVER now is GUERRE.

"I'm going for that kind of ambient r&b, neo-soul vibe. Like if Dangelo made some ambient bedroom neo soul."

A: From Canada but currently stationed in Sydney.

A: My real name is Lavurn.

A: I use Audacity off the internet. Really very basic program ... but I've grown accustomed to it.

A: Recorded at these past few months.

A: It's all me ... except for samples ... I play some guitar but now it's mostly vocals and samples.

A: No official releases... everything's free on my blog.

Q: Since when does this project exist/are you into music?

A: I've been recording music since I was 13 ... and then I actually started doing my own thing and now I'm 18.

Q: Any previous bands worth mentioning?

A: I guess if any my brothers in a psych/rock/blues act called the Revolvers. Check it out http://www.myspace.com/revolvers

Q: Anything that you think is interesting, that you'd like to inform the blog readers about ...

A: Um ... blogs are awesome in general ... but check this show out! Its a Canadian show about travelling and it's utterly amazing. http://www.departuresentertainment.com/about.html

http://spiritifrecords.blogspot.com/ (doesn't seem to work at the moment ->)

GUERRE: Love Lies In the Details

Posted by mike-floyd at 2:57 PM No comments: 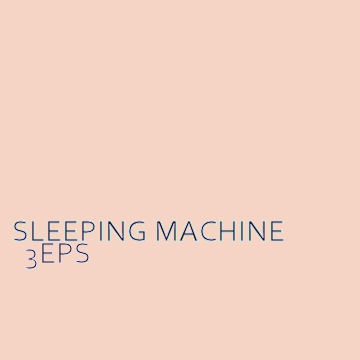 SLEEPING MACHINE is in fact a one-man band, with some musician friends helping out, from Budapest, Hungary.
Most of the music could be described as "electronic" or "ambient", but there are some exceptions (e.g. "It Will Be Painful To Remember This" that is almost a bossa nova...).
Excellent late night listening music!
Q: Where exactly are you from?
A: Budapest, Hungary
Q: Do you want your real name mentioned? If so: What is your real name?
A: No, it's not important, I just go by "mez".
Q: How recorded?
A: I'll use anything. Some of it was recorded on my Fostex 4-track, some was put together on my PC, one song was recorded in a professional studio, during a break while recording with another band. As for instruments I'll use anything from guitars, analog synths to primitive PC music software. My only rule is that I never use samples, pre-written drum patterns, nothing, only original material on the recordings.
Q: When recorded?
A: Some of it was recorded a couple of years ago, some of it is from 2008-09, and there are brand new songs in the making as well.
Q: Who involved? Who played what?
A: It's basically a one-man band, but there are friends helping me out, guys from the other bands I play with, Hammer Of Gods and Domina Massive. There's a detailed description of who played what in the text file of "3 EPs". They also play in the Sleeping Machine live band.
Q: Any more releases?
A: Yes, there's a brand new virtual 7",
"wake me up when we get there",
you can download it here:
http://www.mediafire.com/?3zycqqn1myi
Q: Since when does this band/project exist? - Any previous bands worth mentioning?
A: Sleeping Machine exists since 2008, maybe 07?
I play the drums in two other bands. Hammer Of Gods is a noisy shoegaze/indie rock band, it's getting recognition in Hungary, once we opened for Six Organs Of Admittance for example.
And there's a band called Domina Massive, but it's less active than HoG, it used to be a postrock band in the early 00s, now it's lo-fi whatever I guess.
With some friends we also have a radio/dj/gig organizer team called "Lamantin", we have a weekly radio show, clubnights, and brought bands like Mount Eeerie, The Ruby Suns, Six Organs to Budapest.
Q: How'd you "label" your music? (I know... nobody wants to get labeled... bla bla bla...)
A: homemade, lo-fi, psych... - I couldn't think of better or more fitting! :)
Q: Influences?
A: There are tons of music that have influenced me as a person, but don't show up in my music, so they are irrelevant here i guess. If I think about Sleeping Machine, I'd say Young Marble Giants, The Flying Lizards, Boards Of Canada, Cluster, impLOG and My Bloody Valentine were influential. Not necessary their music, but their approach, attitude to creating music was influential. With this logic I could even list the original Alice Cooper Group, they had amazing ideas.
Q: Website, Myspace?
myspace:
http://www.myspace.com/sleepingmachine
i also run a tumblr:
http://slpngmchn.tumblr.com
Favourite track: the secret life of snails
SLEEPING MACHINE: 3 EPs (HUNGARY 2008/9)
(mp3-zip, 11 tracks, 38 min, 85,6 MB)
01 - AFRAID OF MIMES (2008)
1 - afraid of mimes
2 - cul-de-sac
3 - a slow cold sunrise
4 - it's always a pleasant surprise to meet such friendly monsters (klethi und plethi remix)
02 - ME AGED FIVE (2008)
1 - me aged five, watching the clouds go by on a summer day
2 - i guess i know how that feels
3 - it will be painful to remember this
4 - i'll never be an astronaut
03 - THE SECRET LIFE OF SNAILS (2009)
1 - the secret life of snails
2 - they were happy after all
3 - no character development, no story
Get 'em here or here or here!
Posted by mike-floyd at 4:42 PM No comments: