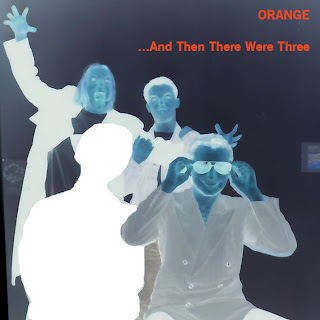 Probably the final (demo) recordings by ORANGE, the German psychedelic grunge band from Frankfurt a. M., after original bass player and founder member Mike S. was kicked out of the band and before ORANGE finally broke up.
By this time the songs were less psychedelic than earlier compositions (e.g. "Sleep My Love", "Idiot in Bed", "Neil's Elevator"), but more in a grunge style ("Heaven, Silky-Green", "Distant Smile", "Bear" or "Soft Paws" (the last two not featured here, will be posted later)) with the guitar very much to the fore, before ORANGE drifted into some post rock style based on monotonous repetition ("Sheltering Hair", "Sex Bus", "Sea Stoned"), earlier already explored live with songs like "Rockwork Orange".

"Deadland" was one of the earliest songs by ORANGE and a live favourite, but never recorded before and "Love In The Suffer Room" was a re-recording from the track from the second demo "In the Garden Of The Demon King".
The most interesting song is "Plane" – it's by far the most psychedelic one.
The fuzz-drenched heavy guitar style of guitar player Maxim Engl (aka POET ZERO) gives a clear foretaste of the direction Maxim would later follow with his succeeding bands PAN AMP and EPHEMEROL. 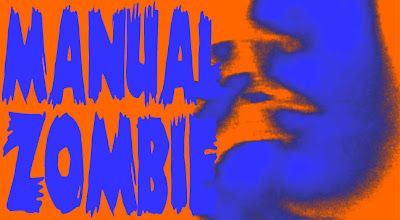 MANUAL ZOMBIE is a New York/Brooklyn-based psychedelic band (like SKY PICNIC), a duo of two guys: Ahmad and Ben. Compared to SKY PICNIC their music is more sinister and far less influenced by 60ies/70ies psychedelic rock. MANUAL ZOMBIE's sound is at least to some degree rooted in the 90ies grunge, post punk and metal sound (though on tracks like "automatic people" some Sweet-Sister-Ray-VU-Punk is greeting). I'd also say I hear some BLACK FLAG influences, and I especially love that excellent distorted guitar playing. Their other main weapon is the voice - often spooky and menacing with strange spoken word passages:This is a trip to the dark realms of psychedelia. Enjoy! 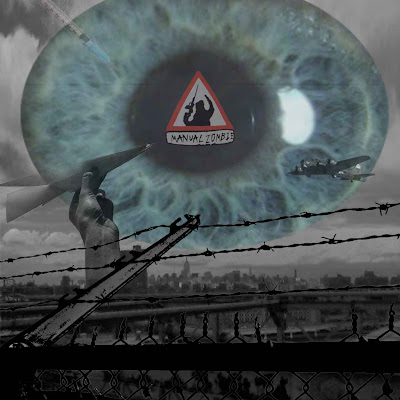 MANUAL ZOMBIE's website lists four releases, and the 9 tracks from this collection here are taken from those records (that you can buy there) except for one song that was only recorded recently.
Favourite tracks: "Automatic People" and "No More Sun"


- where exactly are you from?

- how/when recorded? (at home/equipment...)?
B: We have three albums -all recorded on my computer.

- any official releases? If so, label, record nr.?
B: We haven't really released anything officially. We try to sell cds at shows and actually got somebody to buy one last monday.

- since when are you into music?
A: weird question but I guess I've been into music from a young age, i just took a long time to start playing.
B: I started listening to black flag in 6th grade. Thats when I started playing bass.

- any previous bands?
A: Coupe of denver bands that no one will ever hear of.
B: I played bass in a band called whore nun wizard ninja. We did classic rock covers and played one show. It was terrible.

- how do you "label" your music?
A: indie-heavy, psycadelic-shoegazish rock
B: acid rock

Another Re-up of some stuff by the German Psychedelic grunge/experimental band ORANGE.
Here you'll have the chance to hear the music of their 2nd demo IN THE GARDEN OF THE DEMON KING (see below) live. Enjoy!

Has probably the longest version of "NEIL'S ELEVATOR". There's a small cut at around 22.50 min, but it is hardly noticeable. "Souldrive" is – like in the most versions at that time – included (23.34 until 28.47).
This version here was dedicated to the Frankfurt avantgarde, impro experimental band LAY DE FEAR,that also included MEMBER at that time, a friend of the band and now - together with STOLLE - the heart of the emptyblaukraut-blog. (Read the comment in the original post to learn more about LAY DE FEAR and its side projects.)

You can hear Denner, the drummer and occasional singer and guitarist of ORANGE, mumbling "lay de fear... lay de fear" at some point (at 14.34) in the middle of the free form freak-out part of "Elevator" (starting at 10.58). Also you may notice the beginning of SUPER KING & THE FIRE ACTION's song "Breathing Soft 'n' Slow" shortly later... (at 15.26).

Suse surely must have been very hungry on that day, 'cause in the surrealistic spoken passage she raves about eating and food all the time. e.g. a cake baken by squirrels or apples from an apple tree...
The free form freak-out part has never again sounded so far out, reminding of the strangest GRATEFUL DEAD space explorations, mixed with eraly krautrock noise improvisations... A true listening adventure!

ORANGE played as the opening act at the two day Festival nearby Mainz and Frankfurt a. M., which also featured the old krautrock veterans GURU GURU – not an easy task to do, but they did quite well and also returned to play "Idiot in Bed" as an unplanned encore. This version here is a very good example of how ORANGE always changed their songs in order to keep the material fresh to themselves and their audience. Watch out for the improvised middle part of the song after the line "Now I'm on my way..." (at 4.18), that demonstrates the rush of the drug hitting the character of the song...

Jesus on Heroine - So High I Can't Look Down

Pretty interesting psychedelic band from Denmark who posted a couple of videos on YouTube.
This one here is by far their most psychedelic one.


"Jesus on Heroine are 7 guys in their early twentys located in Copenhagen Denmark, who  decided to start a band playing hypnotic psychedelic music. The plan for 2012 is to release three album/ep's each having a slightly different but still recognizable sound.. "Acoustic Songs on Electric Guitars" is the first release of the three..." (Band-Info)

Meurtre + Maxim Engl (ePHEMEROL) will perform live in Frankfurt a.M. May 09 at EXZESS 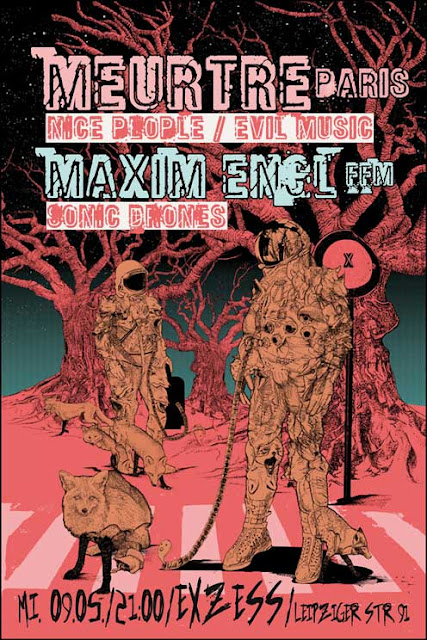