Looking through my window ... Holiday break 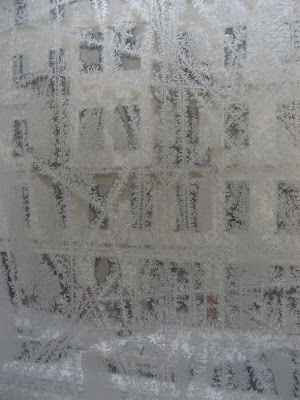 Actually a picture from last year's winter.
But it's quite similar this year...
Have a great holiday season!
– Merry Christmas
and a
Happy New Year to you all! –
See you in January.
In the meantime enjoy the archives! Lots of great experimental and/or psychedelic music to be found!
Posted by mike-floyd at 2:30 PM 3 comments:

More experimental music by J. Lee from San Francisco, CA, USA, Planet Earth.
I'm not sure, if this should also be credited to
LOOPS INC., but I think it makes sense.
Surely no easy listening.... Lots of REALLY very quiet passages and some really weird stuff aswell.
What I call Aboriginal Compilations are cut up noise experimental recordings with whoever may be around at the time. I started doing that around 95-96.
(J. Lee)
You'll find much more free music by J. Lee to download here:
http://public.me.com/jason_a_lee
Check it out!
Favourite track: Deep Deep Sound Sleep
LOOPS INC. - Aboriginal Compilation Vol. 1
(USA 1995-96)
(mp3-zip, 8 tracks, 91 min, 104 MB)
Get it here or here or here!
Posted by mike-floyd at 9:58 AM 2 comments:

Pretty far out experimental cut-ups by J. Lee from San Francisco, CA, USA, Planet Earth.
LOOPS INC. is kind of a lo-fi noise/psychedelic /ambient project.
Read more about J's concept of making music in the interview.
Q: Where exactly are you from?
A: I was raised in South Eastern Massachusetts. Been in San Francisco since 93.
Q: What is your real name?
A: Jason Alexander Lee is the official name on my government file. My friends call me J. or Jay. My mom calls me Jason. Sometimes I call myself Captain J. Rab.
Q: How recorded?
A: I always try and have a dictaphone cassette recorder on me just in case there's something happening. Besides that I used a 4 track cassette, regular cassette deck, Pro Tools, Garage Band. I recorded the raw material onto 30 second outgoing message loop tapes from an 80's Record-a-Call answering machine, manipulated, edited and layered them up on Pro Tools.
Q: When recorded?
A: Loops Inc. was recorded between 07 and 10. My girlfriend Marina Lazzara and I had a baby (Maizie) in 07 so I've primarily been a baby farmer since then. I also have lots of really creative but spaced out and/or busy friends I wanted to be involved so I kept extending the deadline. I'm still getting stuff from people even though it's done.
Q: Who involved? Who played what?
A: Most people involved are from San Francisco except where noted:
Josh Theroux, Mike Stretton (Brooklyn), Brian Lee, Young Elk, Eli Reyes (Ashville,NC), Sam Sebren (Athens, NY), Gary Zaroli (Galway, NY), Sterling Black, Scarp, Jess Rowland, Dr. Brian Oblivion, Bob Noise (Plymouth, MA), Wade Driver, Kevin Murphy (Chapel Hill, NC), Dave Mairs, Franz Worth, Maizie Jade Lazzara Lee, Pablo Liendro, Zarin Kresge, Gian Carlo (Brooklyn), Kenny McKillop, Sara Hersch, JD Donnely (Bethlehem, PA), Shellshag (Brooklyn), Naoki Onodera, Tomo Yasuba, Dino DiNapoli (Brighton, MA), Jesse Parsons, John Dwire, Tala Asim Wynne (Karachi), J.Lee
It's up to the listener to decide who's playing what. In some cases I don't even know. That would only take away from the mystique. - I could give a list of all the cool bands some of these people are in or who does cool art or whatever, but I won't. People usually want a quick read.
Q: Any more releases? Any "official" releases? Discografia?
A: Eventually my entire catalog will all be up on my archive page for free. I don't believe in CDs, don't have enough money to put out records. People at my level don't make money off recordings, anyhow. I'm not a business person and if I was it wouldn't be selling music, It'd probably be selling black holes.
- I've got a 12" full length vinyl record from Aerosol Species sitting around if anyone's interested and some singles, too. I put it out myself in 2000. Static Faction put out some singles and an LP, HIndi Rock Punk Raga around 97-98. It's out of print. I bought a copy at Ameoba a couple years ago for $4.00 so it's floating around out there somewhere.
Q: Since when does this project exist? What's the idea behind Loops Inc.?
A: What I call Aboriginal Compilations are cut up noise experimental recordings with whoever may be around at the time. I started doing that around 95-96. Loops Inc. is basically one of those.
I'll always try and get as many people involved in this kind of project for the random energy factor.
I've collaborated with many of these cats before, but this is the most people I've gotten together so far. It was like having an orchestra, kinda. My theory going into Loops Inc. was to get 30 second compositions from my friends, layer them up and give the illusion of songs.
Q: Any previous bands worth mentioning?
A: My band the Rabbles is putting out an 18 song batch of music called Dabble and I'm putting out a solo LP called the J.Lee Ching on a friend of mine's label. - My 90's rock bands were Static Faction, NoiseStar and Aerosol Species. There's several recordings by those groups worth checking out if one has the time. - There are several Aboriginal Records compilations which were put together cut up style and are pretty interesting if you're tripping hard enough, haha. - It's all going up on the archive page for free. http://public.me.com/jason_a_lee
There's already a full on orgy of music up there right now.
Q: How'd you "label" your music?
A: Loops Inc. tags: lo-fi DIY psychedelic noise alpha wave massage chance cut up music.
Q: Influences?
A: Loops Inc. is a no budget everyman version of the Brian Eno Discreet Music LP's where he loops up a bunch of reel to reels and runs it through effects, so I had that in mind, but to take that and bring it down to the street level rather than some ivory tower recording studio.
Q: Anything that you think is interesting, that you'd like to inform the blog readers about...
A: Hmm, Inform yourself, let me know what you find out.
Q: Website, myspace?
http://www.therabbles.com
http://public.me.com/jason_a_lee
http://www.myspace.com/J._Lee
http://www.myspace.com/therabbles
LOOPS INC. - s/t. (USA 2007-2010)
(mp3-zip, 3 tracks, 71 min, 81,1 MB)
Get it here or here or here!
Posted by mike-floyd at 1:00 PM 1 comment: