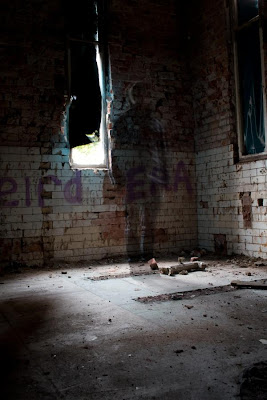 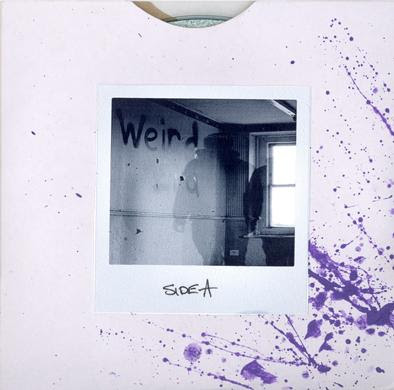 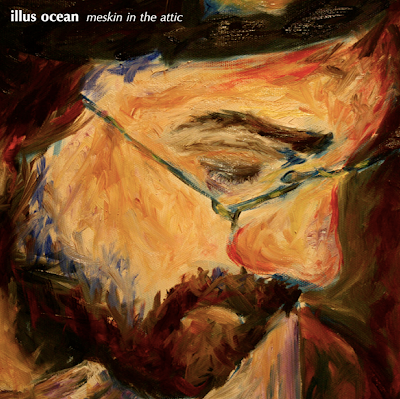 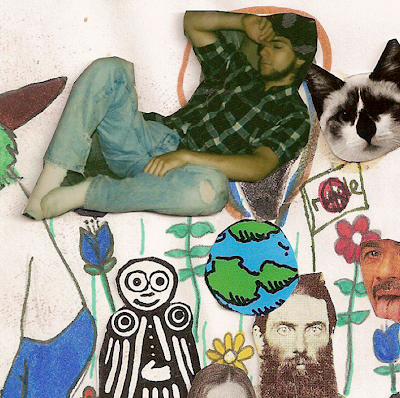 Adam Sarmiento from Alchemist Records (http://www.alchemistrecords.com/) asked me to review the debut album of one of the artists they feature (and to post two of his tracks for your enjoyment):
ILLUS OCEAN's music is a very entertaining mix of different styles from weird country rock to experimental psychedelic pop – homemade lo-fi garage music at its best.
ILLUS doesn't take himself too seriously and so listening to his debut album is pretty good fun. There surely is a slight DAVID BOWIE influenc (ca. Hunky Dory) on tracks like "Oh Well" (my personal favourite), but the band that inevitably crossed my mind is THE FLAMING LIPS.
A very strong debut!
"This astonishing debut record introduces a gifted songwriter and versatile musician whose work ranges freely among genres while sounding precisely like no one more than himself. These songs, from the candy counter pop of 'Gumdrop' to the surreal honky-tonk rocker 'Redneck Vampires on LSD', might leave a listener dancing, humming along, deeply moved, laughing, scratching their head in bewilderment or all of the above. Illus Ocean is a true original who clearly nods to his influences -- Bowie, Robert Smith, and Kurt Cobain all loom large, not to mention the darker and stranger side of any number of country singers in honky-tonks across Illus' home state of Texas -- on an album that nevertheless sounds strikingly fresh and new." (Promo-info by Alchemist Records)
You may purchase "Meskin in the Attic" through most major digital distributers or here:
http://alchemistrecords.com/alchemical/buy/
The two tracks for download are:
1. Ground Zero (The booklet info says: Ground Zero was the result of amy nagging me to write her a love song....so there it is....)
and
2. Gumdrop (is about all the fun I had in my early years on lsd. a bit of lament in there....)
Get 'em here or here or here!
Posted by mike-floyd at 7:56 PM No comments: 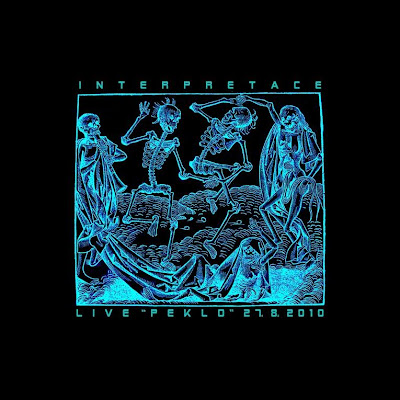 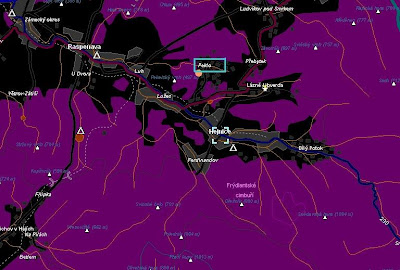 a minor psychedelic low fidelity summer festival in the hell http://www.interpretace.ic.cz/novinky.p2.html there'll be more than our interpretation (interpretace) a couple of other slightly basement czech band(it)s have a good time
richard
(from INTERPRETACE)
Posted by mike-floyd at 7:02 PM No comments: 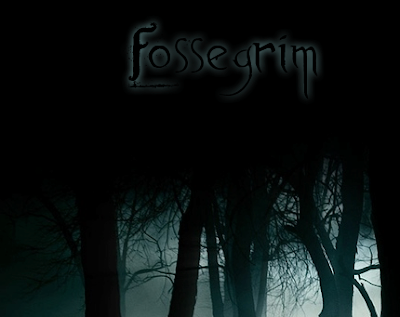 "Trond Fossegrim, true to his namesake, is an elusive mortal – a shadow upon the tide, settling upon the shore only to be pulled out to sea as quickly as he came. While “traditional venues” are a foreign concept, a clever ear might strain to hear his lonesome violin trace a solitary path along the forested coast of the Pacific Northwest. He is a performer by nature whose bow gives a voice to his surroundings and a chill to the occasional lost hiker. He’s helplessly charmed by the vast stretching coastline between San Simeon, CA and Blaine, WA. Should you find yourself wandering these same sandy trails with good intention, you’ll soon find there’s no better stage than a cold Thursday evening…"

"There is not much to say about myself, i am generally nomadic, i do not play "venues" and never on a schedule. I perform mainly to the woods, the streams and, on occasion, the random hiker. Traveling the coast of the Pacific Northwest between San Simeon, California and Blaine, Washington setting up as i feel necessary and adding my melodies to the already beautiful arrangement that my company provides. All recordings are done via cassette or reel to reel... and am in the process of recording new works to be released in cassette format (and possibly cd, but the sound is ruined when made digital)."

http://fossegrim.webs.com/
(Website is under construction)
If you like avantgarde folk/experimental bands with a medieval touch like the British 70s act THIRD EAR BAND, you should definitely have a listen! 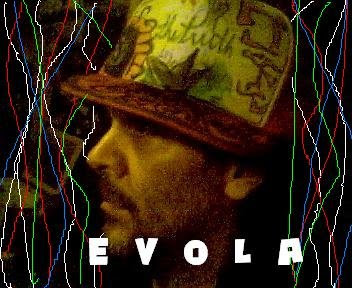 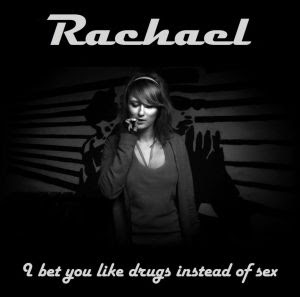 "We did this all on our own. We have supported Ian Brown and we have also invited Dead and Amazing Electronic Talking Cave to our new EP. No label no manager:)" 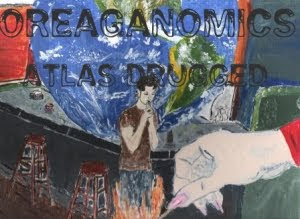 OREAGANOMICS are from Chicago, Illinois.
Anyway, I don't have that much info on this project.
Their music is a weird mixture of different sounds – kind of experimental minimal lo-fi (lots of great, cheap keyboard sounds) and (sometimes) surrealistic noisy music, but always with a pop sensibility. Which is quite a good thing: You even do get some melodies and also some lyrics...
Somehow reminds me of a band that probably hardly anyone will know: Amsterdam-based SOLEX. But OREAGANOMICS are even more radical.
There's a lot to discover, so check this one out!
http://www.myspace.com/oreaganomics
http://oreaganomics.muxtape.com/
Favourite track: Create something to love, Ladders From Earth 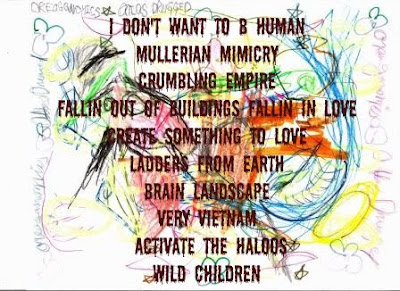 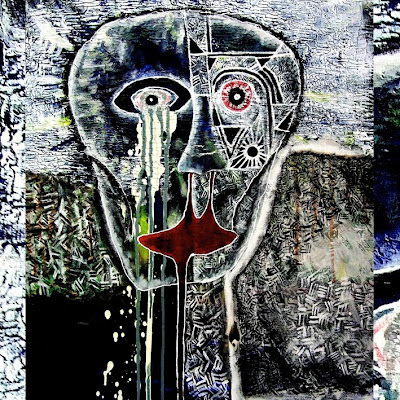 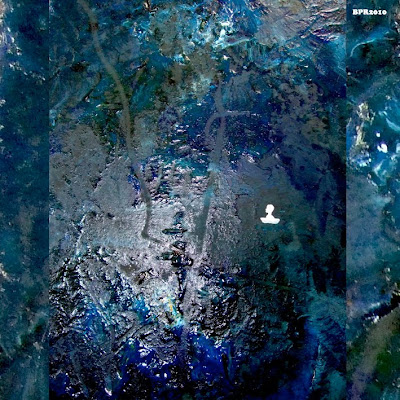 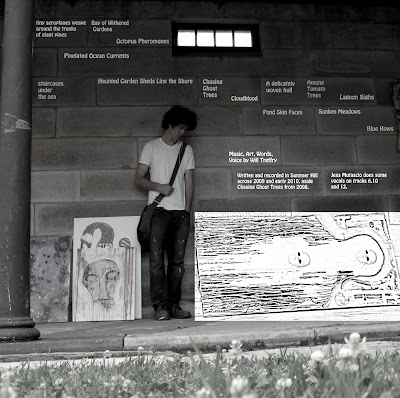 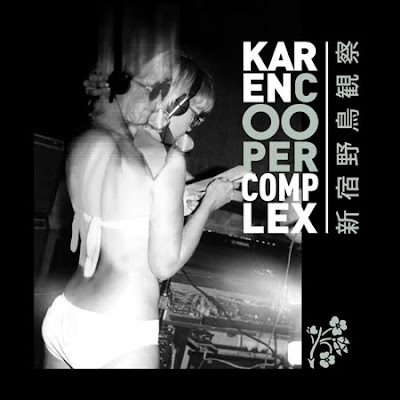 KAREN COOPER COMPLEX... Wooow!
When I heard the first few seconds of You Can't Have It... I was already blown away by this amazing band. What was that? Sounded like a mixture of CAN early/mid-70s pre-punk-krautrock and YOKO ONO, but with a more Wave/Post Punk approach. Anyway: What makes this band so fascinating is that you think of a hundred different bands when you listen to them, but at the same time KAREN COOPER COMPLEX sound like noone else. They are loose and than all at once sound heavily structured... And quite far out anytime!
We refer to it as "Analog Music from a Lost World" — previously unreleased post-punk experimental rock from 1981, unlike anything else recorded before or after. (Bill Altice)
Great band!
"The Karen Cooper Complex line goes all the way back to Big Naptar, a six-piece band featuring two sax players, formed in 1970 here in Richmond, that Frank Daniel, Steve Bernard and I all played in. In those days, we were attempting to force a marriage between elemental rock and free jazz. At the same time, Wm. Burke (aka Key Ring Torch) and Bo Jacob (aka Bo Janne Valvoline) were playing with local oddball legends, the Titfield Thunderbolt. Jacob eventually left to go on the road as a sound man for Parliament/Funkadelic and Burke later went solo, calling his act, Wm. Burke's Hideous Truth.

In the late 70's Steve Bernard and a rotating cast of musicians and non-musicians who called themselves I Saw a Bulldozer, recorded a series of private party tapes, organized around three or four female vocalists who wrote Surrealist-style "Exquisite Corpse" lyrics and chanted them in unison in front of a band, coming across something like a female, beatnik version of the Last Poets, who were more interested in art than politics.

Frank Daniel then plucked Karen Cooper out of the Bulldozer lineup and made her an integral, impulsive instrument in a band that played loosely structured, improvisational rock that was more "Bitches Brew" than Grateful Dead, if that makes sense. From my perspective, all these years later, Karen sounds like an unbridled outsider artist who's simultaneously sending and receiving while the band churns around her. This isn't jazz, and it wasn't intended to be, but we were obviously listening, responding and playing off of each other in the same way more technically proficient improvisers do.

Four of us were also DJs on a local independent radio station and when I listen to this music now, it sounds to me like we'd clearly digested enough influences that I won't try to list any of them in particular — at the risk of omitting as much as I could include.

After the first sessions, Burt Blackburn stepped in for Steve Bernard, who was already living 200 miles away in the foothills of the Blue Ridge, and Bo Jacob, who'd gone back out with Randy Newman, was replaced by the first drum machine in town.

Just as things really began to gel, Karen, who was married to Les Smith, informed us that she was expecting — and the band never played live — in fact, from that point, it never played again at all.

Frank Daniel died of complications of Type I diabetes in 2004 and I've collected and digitized this volume as a salute to his memory and in hopes that someone out there will listen to this music and say 'Good work, Frank. Thanks.' "

Pictures from the Peter Petersen Lightshow at Downtown Bluesclub, Hamburg

Here are a couple of picts from the Downtown Bluesclub Gig by COSMIC FINGER in Hamburg 07-09-2010 showing the psychedelic lightshow by PETER PETERSEN. 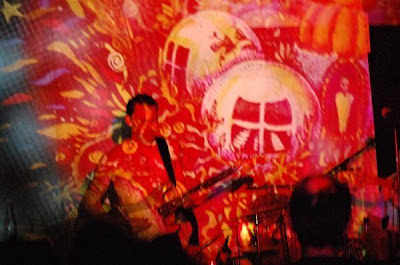 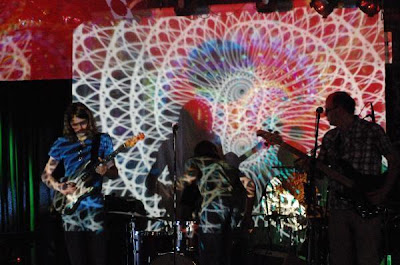 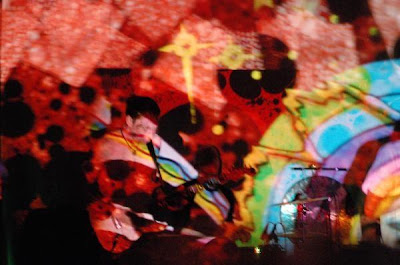 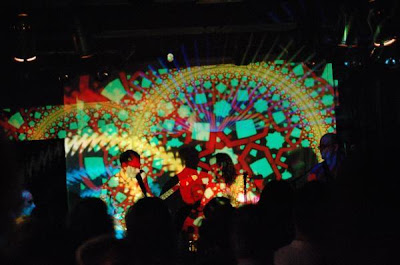 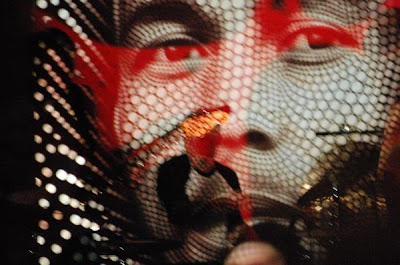 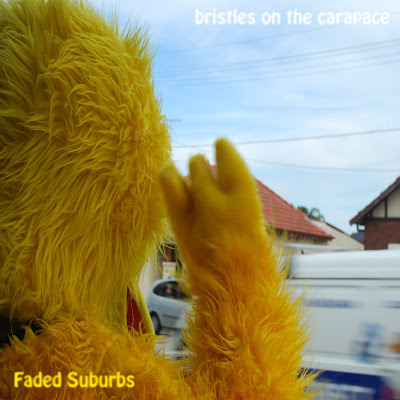 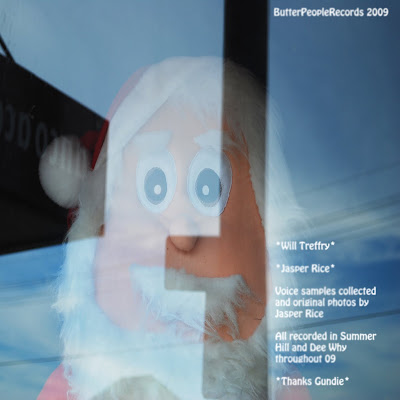 Faded Suburbs is a homemade electronic psychedelic record by Will Treffry (from PANEYE) and a guy called Jasper Rice working together under the name BRISTLES ON THE CARAPACE. It was recorded in November 2009.
It is similar in style to PANEYE, and if you love PANEYE as much as I do, you should definitely download this little gem!
Get it!

BRISTLES ON THE CARAPACE: Faded Suburbs (2009)

Get it here or here! 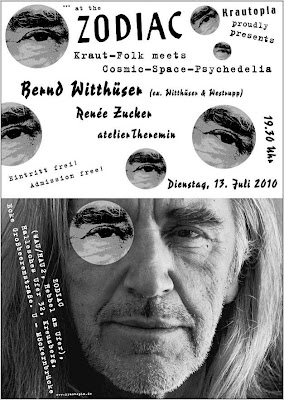