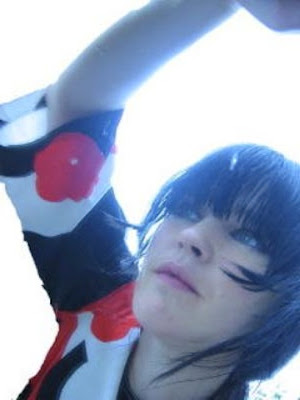 Found this on the http://youcangetwithdiss.blogspot.com blog:
"Saddest news of the year so far has got to be the passing of Trish Keenan, the singer from BROADCAST, who died earlier today (= January 14 2011, m-f) after a two-week bout with pneumonia... An official statement was released by her bandmates on the WARP RECORDS website and word spread fast over the internet, as music blogs and entertainment news sites alike, all acknowledged what a talented singer this woman was and how very much her unique style would be missed...
I first fell in love with this woman's voice back in 1997, after hearing the impressive debut release by BROADCAST entitled WORK AND NON WORK... Around that time, there were great bands likeSTEREOLAB and KOMEDA doing the space-age pop thing and quite successfully I might add... But it would be the charming storybook sounds of childlike wonderment inhabiting this particular album by BROADCAST, that ultimately sealed the deal for me and Keenan's vocals were primarily to blame... Their song "We've Got Time" has always been a favorite of mine and it's really a heartbreaking shame that Trish Keenan's "time" had to end so suddenly...
This is truly a monumental loss for the world of music... R.I.P. my dear..." (UncleDiss)
Couldn't have said it any better ...
Truly a great loss.
Broadcast were one of my favourite bands in the last years, and I was lucky enough to see the band perform live once – it was unbelievable great. I even had a chance to talk with the band after the performance and they seemed to be really beautiful people.
HLFP is back!
Sorry for the lack of posts in the last weeks.
There'll be more coming soon (though probably due to some private issues and a slow internet connection less than before).
Posted by mike-floyd at 4:32 PM

Good to see you back!! Although, it gave me a good excuse to check out everything in the Focus On section, which was pretty much all AWESOME, so it worked out rather well.