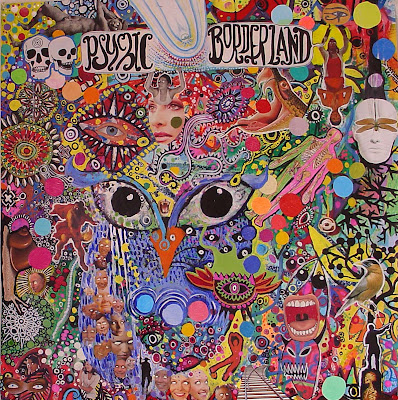 "Somewhere in the twilight zone between delusion and disillusion, between freedom and success, between insanity and brainwashing, lies a psychic borderland (...) Between song forms and free noises, between cultural references and unintended consequences. Far out (on the inside). Somewhere between stimulus and recovery (...) It's a concept album. About an aging psychedelic artist losing his mind. He comes to believe that his waking life are his dreams, and his dreams are his real life (...)"
(M J B on http://magicplasticcassettefactory.blogspot.com/)
MICHAEL J. BOWMAN is a man of many talents. He is a musician and artist and lives in Brooklyn, NY, USA. Between 1989 and 2006 alone he released 15 full-length cassette albums of experimental pop-rock on his homemade Semperlofi label.
Q: Where exactly are you from?
A: The psychic borderland
Q: How recorded?
A: Through the condenser mic on my mac powerbook G4. All the songs were done in my apartment here in Brooklyn, except the drums for "Far Out On The Inside" were recorded in a practice room on a real drumkit (also here in Brooklyn). I played everything myself, layering the tracks in Garageband. Garageband has tons of cool effects, plus with cutting and pasting you can really get lost in a project... At home my gear consists of an ovation acoustic guitar, a casio keyboard and half a drumkit. I got the electric guitar sounds by tricking out the acoustic guitar tracks in Garageband. I also threw in sound-clips from old news interviews on YouTube, plus some sound-clips of my then 2-year-old daughter laughing and screeching. There's probably some of her toys in the mix too.
Q: When recorded?
A; Summer and Autumn 2009
Q: Who involved? Who played what?
A: I wrote, played and sang everything. The basic riff for the song Ghost was inspired by a track that Don Campau and I recorded together many years ago.
Q: Any more releases? Any "official" releases?
A: I've been "releasing" stuff, mostly cassette and CDR albums, since 1989. I released a 7" single called "I Shot The Invisible Man" in 2006. To see the discography go to http://www.flickr.com/photos/velveetaheartbreak
Q: Since when does this band/project exist/are you into music?
A: Been playing in bands since the late '70s, doing my own albums since 1989.
Q: Any previous bands worth mentioning?
A: I played drums for The Brian Wilson Shock Treatment from 2004 to 2006, it was an amazing experience.
Q: How'd you "label" your music?
A: Experimental Lofi Pop-Rock
Q: Influences?
A: The usual - later Beatles, '70s King Crimson, Eno's first 4 solo albums, Guided By Voices, first Pink Floyd album, the first couple Residents albums, Hendrix, Matching Mole, Hatfield and the North, anything proggy/psychedelic/interesting/catchy
Q: Website, myspace?
A:  http://www.gallerymjb.com is the main portal, there are links from there to the rest of my Internet splatter
Q: Anything that you think is interesting, that you'd like to inform the blog readers about...
A: When I was making "Psychic Borderland", I was really trying to create a deeper, more involved psychedelic concept album than anything I'd done before. It was really supposed to be a complete listening experience, not just a collection of tracks. I wanted that dreamy, psychedlic feeling when you turn the lights out and put the headphones on and go inside the album for 40 minutes or whatever. Not sure I pulled it off but that was the goal!
Most of the songs on "Psychic Borderland" could be described as experimental or psychedelic pop music except for the last track, the appropriately titled "Passage" that also starts as a low-key pop song, but soon evolves into a psychedelic space drone delirium... Quite an introspective album with a rather dreamlike atmosphere.
Favourite song: Far Out (on the Inside) and – of course – Passage
You should really check out Michael's blog:
http://magicplasticcassettefactory.blogspot.com/
Here you will find more info about "Psychic Borderland" and his other musical projects including VELVEETA HEARTBREAK (to be posted soon) as well as some reviews and a link to Michael's excellent drawings and paintings – most of them could definitely be called "psychedelic". 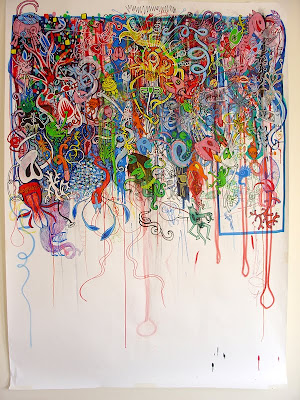 "Holy Shit"
IF YOU LIKE WHAT YOU HEAR AND SEE, PLEASE SUPPORT THE ARTIST. YOU MAY PURCHASE THE CD VERSION OF PSYCHIC BORDERLAND OR SOME OF MICHAEL'S ART VIA PAYPAL (look at his blog for more information)!
MICHAEL J. BOWMAN - Psychic Borderland (2009)
(mp3-zip, 8 tracks, 51 min, 69,6 Mb)
Get it here or here or here!
Michael gave me his ok to feature some of his excellent art, and so here we go! 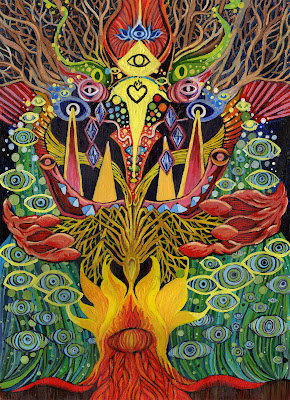 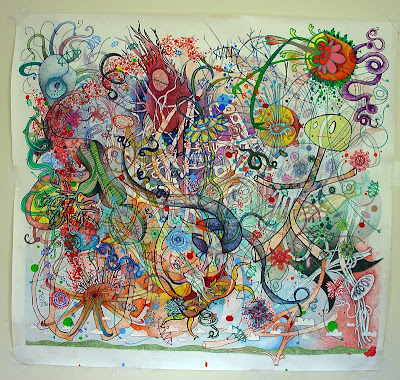 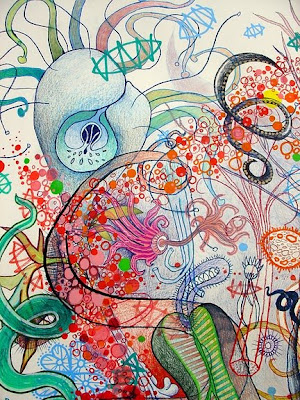 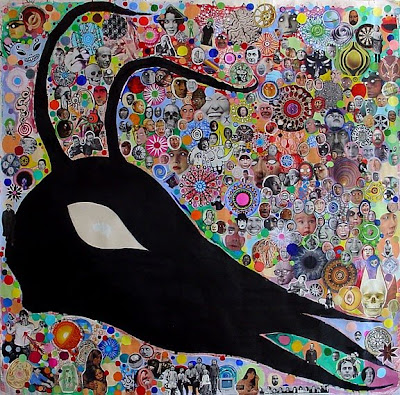 Good stuff - dark, moody, beautiful and artfully arranged. Not too unlike Taylor Parkford's "Killer Jist" (and if you haven't downloaded that yet, DO IT!) except that more weight is put on the instruments than the vocals. I'm especially fond of the transcendentally melancholy "Crazy Uncles" at the moment.